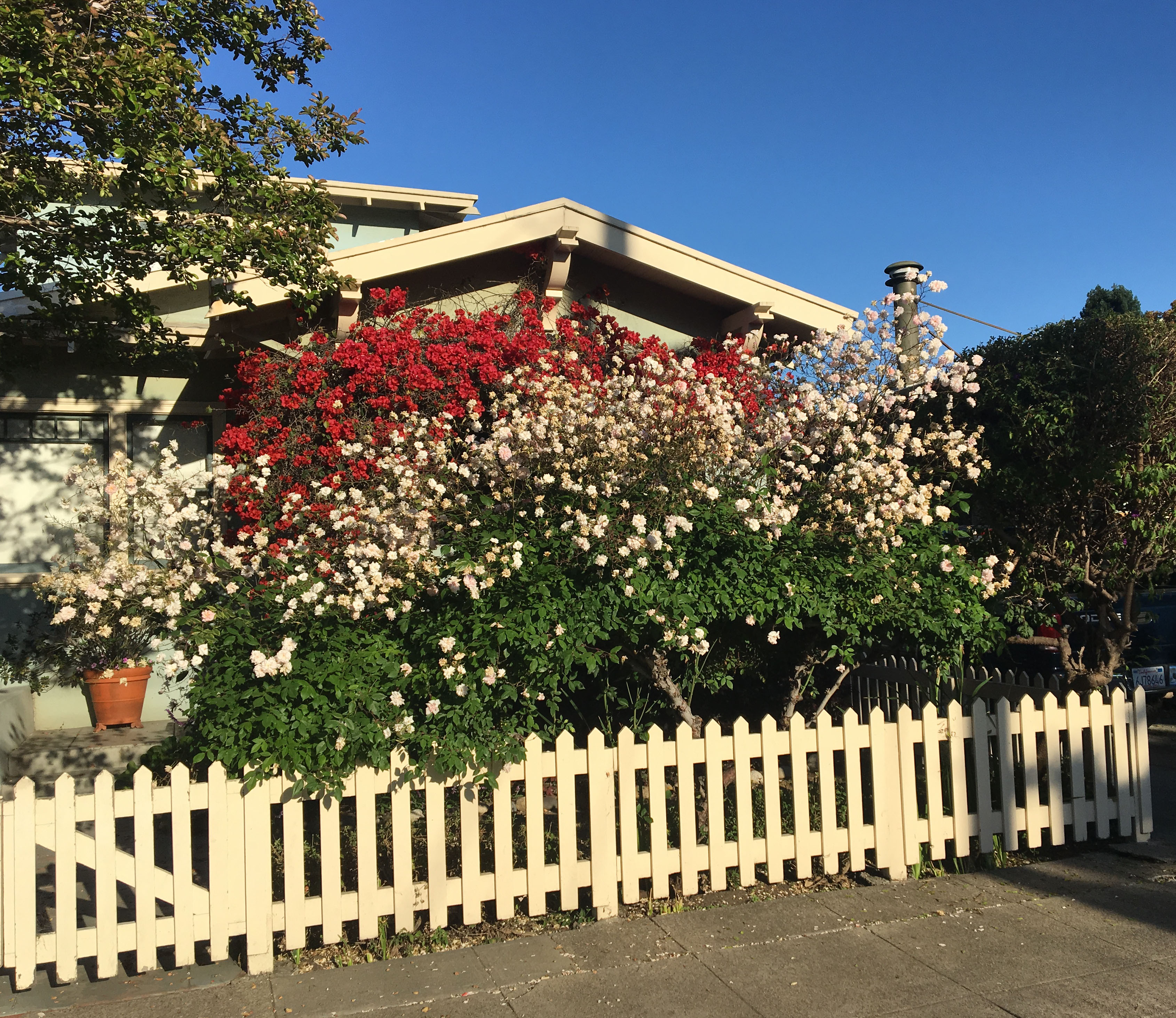 Walking in the neighborhood of Temescal, Oakland is the default setting for my morning walks.  It’s right there – just throw on some clothes, put on some shoes, grab the iPhone (or not) and out the door.

I never tire of the immediate surroundings; there is always something I haven’t noticed before that draws me in.

Usually, I spend my time examining flowers, plants, fencing and garden paths for inspiration for my yard. I take a lot of photos, many of which I post to my Instagram @onemilefrommyhome – a project that is meant to keep me continuously inspired and connected, albeit sometime frustratingly so, with the goings-on in my neighborhood.

I love observing the different house colors palettes and how the colors look different compared to days before depending on the light. I’m obsessed with color and the dynamics of color and how it affects the human spirit.

Today my route from Mosswood into Temescal took me up the east side of Webster to 45th Street where I made a left. Along this initial stretch of 45thStreet are several small bungalow Craftsmen houses. What caused me to pause were the house numbers. Each different – tile, stickers and an elaborate Arts & Crafts style plaque. Each greeting the observer with it’s own style.

The house at #449 curiously had three numbers. There was one on the gatepost and two on the gate – a whimsical little green gate with a porthole offering a glimpse of what’s on the other side.

I crossed the street and continued along the north side of 45th, passing by a gentleman asleep on the sidewalk under a blanket, a grocery cart next to him holding a few belongings.

I cut through the McDonalds parking lot on the corner and up Telegraph. The old pink Hooper’s Chocolates building standing out amongst its neighbors, now displaying several “For Rent” and “Private Property” signs in the window.

A Telegraph Avenue oddity, this weathered edifice sends a bittersweet smile through me every time I pass it. At one point this was clearly the pride and joy of the Hooper’s, whose penchant for crafting good candy is emblazoned on the marquee that still stands proudly in front. The location has housed a variety of businesses over the years, but sadly nothing seems to stay for very long.

For some fun history on the Hooper Building, check out this post on Hoodline: Somethings Stirring at Telegraph Avenue’s Pink Hooper’s Chocolate House, by Will Callan.

I continued up Telegraph and took a right on 48thStreet. A short way down, I noticed what looked like an etching in the sidewalk. It’s where Clarke meets 48thon the south side of the street.

I immediately looked up, spun around from where I was standing for any sign that might be related to the marker. The sidewalk etching was in front of the Oakland International High School field, which equally had a bit of intrigue this morning. Two pairs of cleats abandoned on the field that left me wondering about the feet that were in them prior to being left behind.

Back to the etching.

It was perfect. A call out to a lost era, when people used parks as their regular gathering places.

Parks were the anchors of neighborhoods, drawing communities together and grounding them in their relationship to the space and not necessarily to each other.

I remained lost in this thought for a moment and then snapped back to my present location, wondering if the field at the high school may have been part of the park system referenced in the marker. I made a mental note to do more research on the subject when I got home.

I continued walking along 48th Street, back to Webster where I turned right and headed down the street, pausing to notice this beauty:

I continued down Webster street to 38th Street where I came across another building curiously adorned with three of the same house numbers. Had there been issues when there were only two house numbers? Packages or pizza not being delivered? What inspired the third and which one was the first?

Does your house have three sets of numbers?

If anyone is living in a house that has three sets of numbers in front, I want to hear from you. Share the story!

Back at home, I did some sleuthing and found this website, http://www.10ksteps.org which describes the project related to the sidewalk etchings. What I didn’t find was how the 10K Steps project, which focused on 5 park square in downtown Oakland – Jefferson Square, Lafayette Square, Madison Square, Lincoln Square and Harrison Square, – was related to Temescal and the etching I found. Perhaps it was promotional, encouraging folks like me to get more involved in their neighborhoods and understand their history?

Curious, I sent an email to the address found on the site. Sadly, it bounced back. I may dig a little deeper, but I rather enjoy the bit mystery around the etching so likely I won’t.

Have you walked around your neighborhood lately with a fresh pair of eyes? What are you seeing?